We knew it was going to be a hard fight. For nearly a year KS Fair Maps partners have been organizing, messaging, training, and preparing for a redistricting process that would ultimately be decided by the KS Supreme Court. We're proud of what we accomplished - hundreds of pieces of testimony collected, dozens of media pieces calling for fair maps, a successful case in district court, and all of YOUR voices calling for fair maps - but we're still disappointed in the result.

Kansans deserve a redistricting process that is transparent and maps that are fair. What we got instead was a secretive process and gerrymandered maps that will dilute the votes of minority voters for the next 10 years.

We've taken a couple of days to reflect, and we're gearing up for the next steps. But in the meantime, we wanted to connect with you. We have a couple of things we want you to know.

Thank you. Seriously, THANK YOU. You showed up at every opportunity to  speak up for fair maps. The amount of public testimony that could be cited was critical for the win in the district court, and we couldn't have done that without you.

Let your legislator know that you're still watching. What happened in the Statehouse was an egregious display of partisan gamesmanship. Email your legislator now - before the session ends on Monday - and let them know that gerrymandering is wrong and we will not forget their role in drawing fair maps.

It's time to get out the vote! We have HUGE elections coming this summer and fall for constitutional amendments, the State House, and local offices, and the filing deadline for candidates is next month. We need good candidates to run in these newly drawn districts, and voters to turn out in both August and November.

We're here for you. KS Fair Maps partners are organizing, advocating, and educating voters. We invite you to join us by contacting any of our organizations linked below and getting involved in these efforts.

League of Women Voters of Kansas

Thank you again for being part of this momentous effort to bring fair maps to Kansas, and stay tuned. There's still lots of work to do, and we hope you'll be there fighting right beside us.

What to Know & How to Get Involved

What is redistricting and why does it matter?

Every 10 years after the census, states redraw voting districts to reflect population changes. These districts play a big part in election outcomes, with the potential to shift the partisan balance in Congress, state legislatures, and local governing bodies (city council, county commission, school board).

How does redistricting work?

Starting in 2021, the legislative Joint Special Committee on Redistricting will discuss redistricting in public meetings. The Kansas Legislature will then draw congressional districts during the 2022 legislative session. These districts must be agreed to by a simple majority vote and signed by the Governor.

What are the challenges?

District Packing – Concentrates a community of voters into one district to minimize their influence in other districts.

District Cracking – Dilutes the voting power of a place by breaking it into pieces absorbed by nearby districts.

What can I do?

Take Action. The KS Fair Maps Coalition is closely monitoring the redistricting process. Keep an eye out for updates and action alerts sent via email. Not on our email list? Subscribe here.

Tune In. Subscribe to the Kansas legislature’s YouTube channel here to get alerts on live Redistricting Committee meetings. Learn how to share your voice with the committees here.

The KS Fair Maps Coalition is a nonpartisan grassroots education and engagement effort by organizations and individuals who want to see an equitable redistricting process that:

Coalition partners include (in alphabetical order): 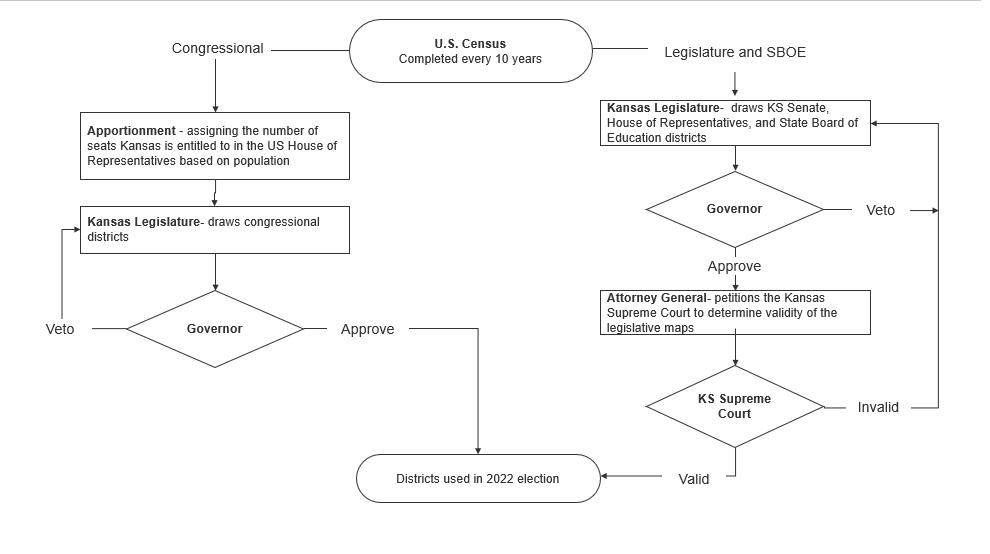